JW Fit Music distributes the music evenly into a specific number of staff systems across a region. It’s a Finale plug-in particularly suited for part layout. The music will be moved across systems regardless of any old system locks and the new staff systems will be locked.

JW Fit Music distributes the music evenly into a specific number of staff systems across a region. It’s a plug-in particularly suited for part layout.

The music will be moved across systems regardless of any old system locks and the new staff systems will be locked.

Here are some examples of what it can be used for: 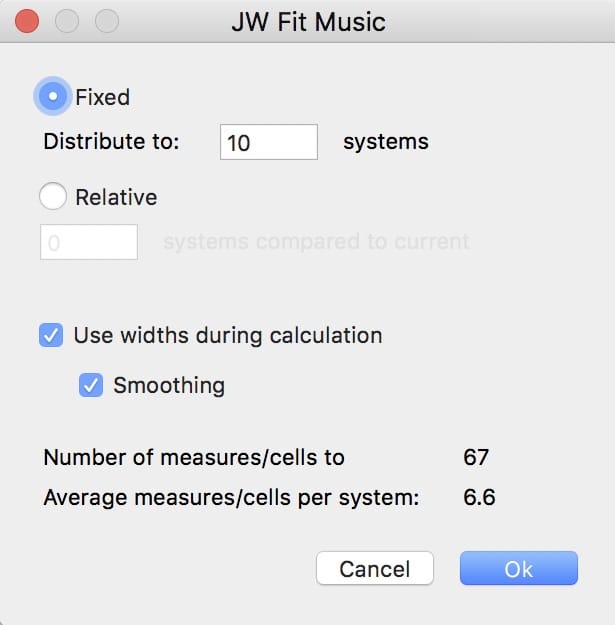 In genres such as published classical music, a good music layout is dependent on multiple factors:

This plug-in can help with both the musical layout and the grey level on the page.

Since the main calculation prioritize an equal cell flow throughout the region, that can lead to rather bit rounding errors on adjacent systems. If smoothing is selected, the plug-in will run an extra pass to try to smooth differences between adjacent systems. Smoothing will generally result in a more balanced layout.

To be able to get a good result in width-based calculations, the plug-in needs to know the needed widths of each cell. Important:

To reflow the measures layout without changing the number of systems, fit with a Relative value of 0.

For each project, decide how many lines of music (systems/staves) each page of the part should have. Remove one line of music from the counter if there is a title on the page. If the part has a divisi that splits into multiple staves, count all these as separate line of music on the page.

Work from larger regions to smaller. For example, start by fitting the full 2-page spread until the page turn, then fit smaller sections (that should ideally start/end a system) on the pages.

If the plug-in displays an error message, it’s probably caused by a system or page breaks, which might cause a too uneven layout. If that’s the case, treat the region before/after the break as two separate regions.

To improve the layout of larger sections, look at the end of the systems. Try to avoid important information (such as a new tempo, new dynamic, time sig change, etc) in the very last cell. To resolve such situations, try to fit that end measure with the subsequent systems and reflow the measure layout.

After the basic measure layout has been settled, use Finale’s Space System plug-in and JW Space Empty Rests plug-in for final adjustments on the page.

Page layout made easier with JW Fit Music for Finale

Be the first to review “JW Fit Music” Cancel reply